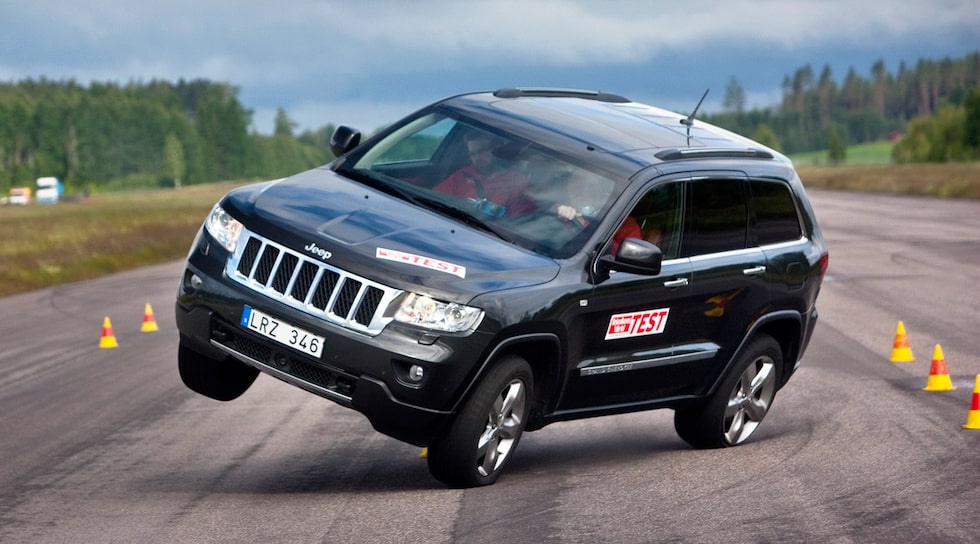 The Jeep Grand Cherokee grossly failed the Teknikens Värld’s evasive maneuver test, commonly known as the moose test. Teknikens Värld loaded the car strictly by the information provided by Jeep Europe. Here are all the facts.

The Jeep Grand Cherokee Overland 3.0 CRD V6 tipped up on two wheels and was close to rolling over in the Teknikens Värld moose test, despite having packed the car in accordance to Jeep’s specifications. Thanks to our professional driver, we were able to land the car on all four wheels again. But how was this possible?

The issue is that the weight provided by Jeep/Chrysler that the car was officially registered with in Europe. The cars weight – not only in Sweden but also in for example in Norway and the United Kingdom – does not comply with reality. In for example Poland, Jeep claims a curb weight and a maximum load that exceeds the total gross weight.

This is how the test was conducted

Prior to the moose test we packed the car with four passengers and sandbags with a combined weight of 602 kilos (1 327 lbs) which is the maximum amount according to the cars certificate of registration that has been provided by Jeep/Chrysler to the Swedish Transport Agency, Transportstyrelsen. We proceeded to our test track (see image) to conduct the moose test. We immediately noticed that there was something strange about the car’s behaviour –it tended to tip over on two wheels even at low speeds. We accordingly unloaded 100 kilos (220 lbs) out of the car so that the total cargo weight now registered at 502 kilos (1 106 lbs), 100 kilos under Jeep/Chryslers own registrered maximum cargo weight.

Since the behaviour of the Jeep Grand Cherokee was both dangerous and potentially lethal, we suspected that the car was actually packed with too much weight. We immediately proceeded to weigh the car on a scale and got our answer. The Jeep Grand Cherokee does not have a curb weight of 2 347 kilos (5 174 lbs) that the Swedish certificate of registration indicates (see the attached image below), a figure that Jeep/Chrysler has provided to Transportstyrelsen. In fact, the car actually has a curb weight of 2 505 kilos (5 523 lbs) with a driver in the car. That is a full 158 kilos (348 lbs) more than what Jeep/Chrysler claims the car to weigh in the official documentation provided to Swedish authorities.

Add the 602 kilos (1 327 lbs) that Jeep/Chrysler claims the car being capable to load and the total gross weight is now at 3 107 kilos (6 850 lbs). This can be compared to the claimed total gross weight in the vehicle’s registration papers –2 949 kilos (6 501 lbs). This, again, is a number that Jeep/Chrysler have provided. In other words – if one packs a Jeep Grand Cherokee Overland 3.0 CRD V6 with the maximum allowed capacity, one overshoots the total gross weight of the car by 158 kilos (348 lbs). Worth mentioning is that we only overshot the total net weight by 58 kilos (128 lbs) since we unloaded 100 kilos (220 lbs) out of the car when we performed the test as can be seen in the video clip. The car still went up on two wheels.

Teknikens Värld always follow the official data provided by the cars’ certificate of registration, just as an ordinary car owner would. What car owner places his or her car on a car scale before a trip? Teknikens Värld has therefore not packed the car with too much weight but according to the certificate of registration and thereby also by Jeep/Chrysler’s directives. The moose test was furthermore conducted with the correct tire pressure for maximum load according to the recommendations provided by Jeep/Chrysler via a sticker on the car’s B-pillar. The car's safety systems, such as the ESP-system, were turned on and the chassis settings and air suspension were in normal mode.

What should also be noted is that the weight specifications for the Jeep Grand Cherokee cannot be found in the manual. The only information that can be found on the car is the total gross weight (2 949 kilos/6 501 lbs), gross combination weight (6 449 kilos/14 218 lbs) and the maximum weight over the front and rear axles (1 452 kilos/3 201 lbs and 1 678 kilos/3 699 lbs, respectively). The curb weight and the maximum load capacity is instead taken from the Swedish certificate of registration that you can read in its entirety in the image gallery below.

We can also announce that we informed Jeep/Chrysler of the failed moose test prior to sending the magazine to print. We did this to give Jeep/Chrysler a chance to comment on the failed test. They did not respond.

In the image gallery below we have provided the weight specifications for not only the Swedish certificate of registration, but also the certficate registration for Norway and the United Kingdom (as was provided by the web sites jeep.no and jeep.co.uk). The same figures are used as in Sweden but with the main difference that the driver’s estimated weight of 75 kilos (165 lbs) is accounted for in the maximum load capacity which thereby adds up to a total of 677 kilos (1 493 lbs) which gives a curb weight of 2 272 kilos (5 009 lbs). The total gross weight is thereby the same as in Sweden – 2 949 kilos, or 6 501 lbs. But as we mentioned earlier, the car that was tested weighed substantially more than what is indicated by the official figures provided by Jeep/Chrysler and if you pack the car to the specified maximum cargo weight the total gross weight is substantially exceeded – in Sweden as well as in Norway and the United Kingdom.

Following the jump is more information on how we conduct the moose test – a test that we have performed on thousands of cars for nearly 40 years.