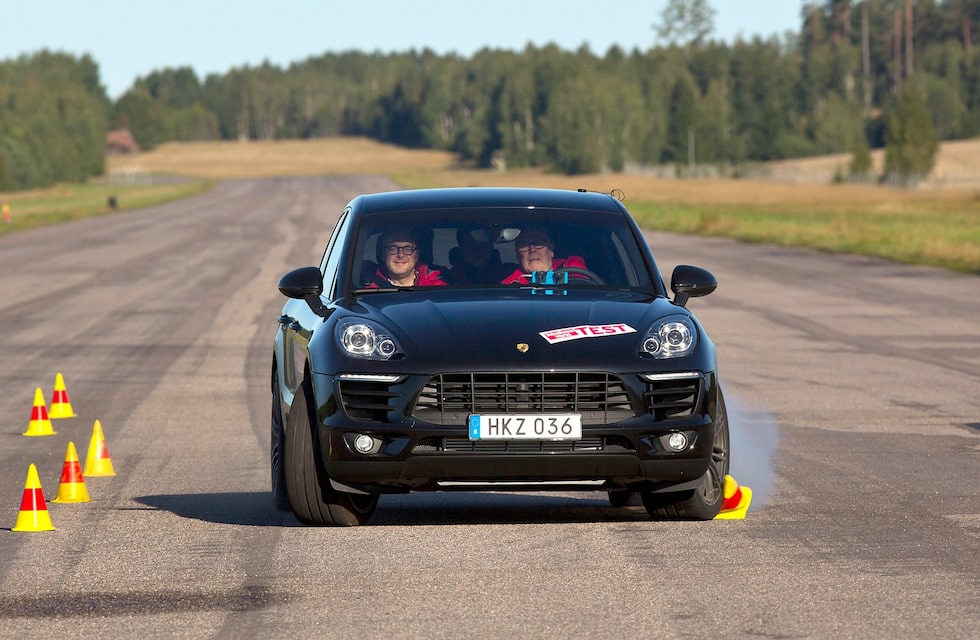 In Teknikens Värld's latest test where the BMW X4, Range Rover Evoque and Porsche Macan are included, the latter behaves strange in an evasive maneuver.

Teknikens Värld's moose test is unique when it comes to testing cars. The acute and panicky evasive maneuver has become the standard for many manufacturers in the industry.

Porsche has long distinguished itself as a car manufacturer with brilliant performances and results in our moose test. For example the new 911 (991) Carrera, under total control, almost hits record speed with 81 km/h (50.3 mph) in the moose test track. As a matter of fact, all 911 models hits speeds over 80 km/h (49.7 mph)!

Therefore our expectations were high when we tested Macan S Diesel first time (Teknikens Värld issue 11/2014). But the result was really bad, almost a disaster when we talk about the normally roadsafe Porsche. Most competitors in the SUV class excels with significantly better handling, control and level of security.

Compared to other standards in automotive testing, the size (width and length) at Teknikens Värld's evasive maneuver track is constant, regardless the type of car. In other countries the dimensions of the track are adjusted to fit larger or heavier cars, but we always base our testing on reality, for instance a road cannot be resized.

When we drive another individual, still a Macan S Diesel, the results are equally bad. Here is a copy/paste from test driver Linus Pröjtz's notes after the moose test with Macan:

”Porsche Macan S Diesel behave very strange in the moose test, most especially because the left front brake locks up in the middle of the maneuver. This is really strange.”

The moose test starts at 70 km/h (43.5 mph) as usual, we drive into the test track and swerve the vehicle to the left. Then we turn sharply to the right to ultimately take us back to the correct lane as soon as possible - then it happens.

Left front brake locks up and the result is that the car continues straight ahead for a moment, instead of continuing the turn to the right to get back into the correct lane. In other words, the car with its passengers remain unnecessarily long in the opposite lane, which is never to be recommended in an emergency.

Macan's behavior is repeated over and over again in the moose test, and we have seen the same behavior in previous tests of the Porsche Macan. BMW X4 and Range Rover Evoque perform significantly more secure, both steering and brakes are working effectively. Some course changes from the track, like the Macan does, never occurs.

The brake intervention shown in the video is a deliberately applied intervention to prevent the car from rolling over. This is called Active Rollover Prevention (ARP). The precise, momentary application of brake force to the front wheel at the outside of the bend down to the low slip range minimises cornering forces to avoid critical or instable driving conditions such as oversteer, rollover or detachment of the tyre from the wheel. Situations such as these may not be controllable by the driver.

The video shows that an understeer response is selected on purpose since it is significantly easier for the driver to control than oversteer. The function shown and the resulting driving response are explicitly desired to increase driving safety in such a highly dynamic driving manoeuvre.

In the SUV segment, Active Rollover Prevention (ARP) is state-of-the-art technology and is also used by other vehicle manufacturers.

The intensity of ARP intervention is dependent on vehicle speed and steering angle speed, among others. This means that ARP brake intervention is diminished accordingly at reduced vehicle speed or steering angle speeds. On the other hand, it means that the driving style adopted by Teknikens Värld was very demanding and resulted in the safety function being triggered.

Active Rollover Prevention is permanently active, irrespective of whether Porsche Stability Management (PSM) is on or off. If PSM is on, ARP intervention is significantly diminished since PSM brake interventions to stabilise the vehicle occur much earlier or are superimposed.

The function (ARP) is applied for a maximum of 300 milliseconds, depending on the driving situation. This short intervention ensures the directional stability of the vehicle. Lateral displacement is negligible. For this reason we do not regard this driving state as critical. As the video shows, lane changing can be completed stably and safely. What is more critical in this situation is if the vehicle were to roll over or the rear were to break away. The vehicle demonstrated none of these instable states (rollover, oversteer, wheel lift) at any time.

Porsche uses a comprehensive dynamics test programme which the Macan completed successfully. The driving manoeuvres performed include double lane change according to ISO, slalom with 10 x 18 metres and 10 x 36 metres, the VDA obstacle avoidance test which is very similar to the Teknikens Värld "moose test", and the NHTSA rollover safety test. All Porsche cars are designed for maximum safety based on these and other world-wide tests.