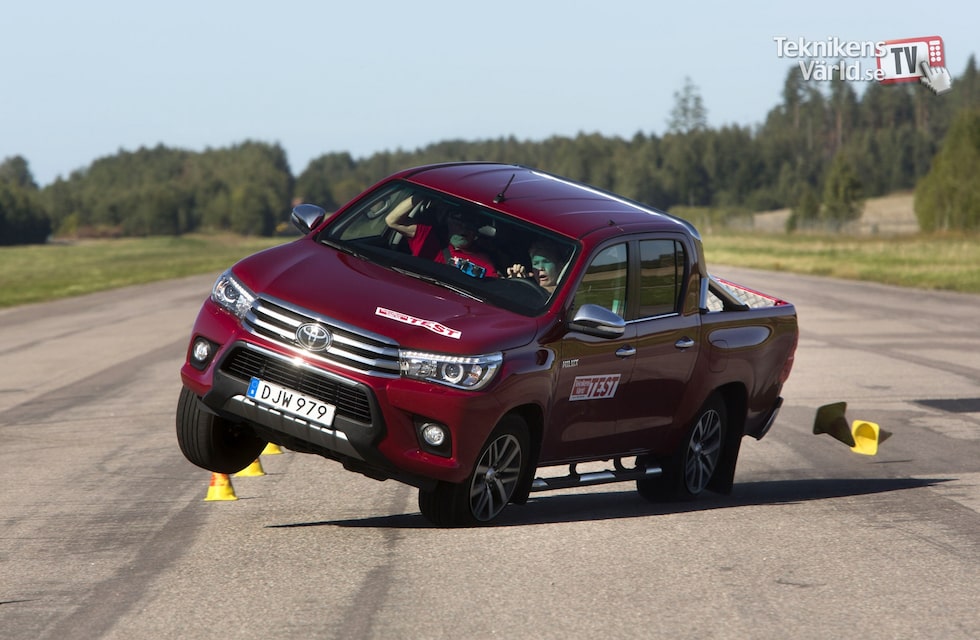 The new Toyota Hilux close to tipping over

In 2007 Toyota Hilux went up on two wheels during an evasive maneuver in the famous moose test. Nine years later, with the all-new Hilux, it happens again.

Perhaps we should have been more prepared. In 2007 Teknikens Värld tested six pickup trucks. In the moose test the Toyota Hilux ended up as a big failure. When Ruben Börjesson drove at 57 km/h (35 mph) the vehicle's left side suspension bottomed out and the right front wheel did a dramatic lift. Thanks to Ruben Börjesson's quick reactions he could save the situation and got the car down on all four wheels. The deciding factor was the wide tires that was mounted on the optional bigger wheels which the test car was equipped with. The grip was too good and in combination with a high center of gravity and the absence of electronic stability control the Toyota Hilux was close to roll over. After the incident Toyota throughout Europe halted the sales of Hilux with the bigger wheels.

Now the year is 2016. All pickup trucks in the test has electronic stability control and we do not expect any form of risk or danger. The systems should, when correctly calibrated, manage the avoidance maneuver. The other pickups in the test pass the moose test track at 64-68 km/h (40-42 mph). When the limit of grip is reached the pickups just understeer straight ahead. But not when the test team enters the new Hilux Toyota.

Oskar Krüger gets behind the wheel and accelerates up to 60 km/h (37 mph). The first attempt is always with low entry speed.

After that Oskar steers back to the original lane.

– It feels as if the car gets too much grip. I am totally focused on getting the car into the first lane again and I notice nothing until we are about to tip over. Then I countersteer and the wheels get back on the ground, says Oskar Krüger.

The moose test is performed with the pickup trucks' maximum load according to the specifications provided by the manufacturers. Toyota Hilux has the highest load capacity among the tested pickups, 1 002 kg (2 209 lbs), but in this test it was loaded with only 830 kg (1 830 lbs), including the driver and four passengers, because our weights were not enough. In other words, is not likely that the load is the causing problem here.

– If that would be the case the suspension should have bottomed out but it didn't. Instead I think the problem lies in the absence of anti-rollover systems and the grip of the tires, says Ruben Börjesson, Teknikens Värld's experienced test driver with thousands of moose tests under his collar.

This year's test car is also equipped with bigger wheels with tires in the dimension 265/60-18. A few days later, we got to test another Hilux with standard 17 inch tires in size 265/65. Once again the Hilux lifts the inside wheel, but less than the other car.

Something is seriously wrong with Toyota's dynamic safety system, and the result is dependent on the tires the car is equipped with.

Based on all the tests carried out during development, we are confident that the Toyota Hilux is a safe vehicle. As we understand, you have performed an evasive maneuver test according to your magazine testing protocols on several pickups, including the Toyota Hilux. You have informed us that the Toyota Hilux is not living up to your expectations. We were surprised by the test result, and we will take your evaluation very seriously, in the same serious way we do with the capacity for evasive maneuvers in the development of our vehicles. Hilux has been repeatedly tested according to the ISO 3888 standard for evasive maneuver tests during the development of the model and then it passed the tests successfully. Several technical parameters have an impact on the outcome of an evasive maneuver, so we want to better understand the exact parameters for your test. 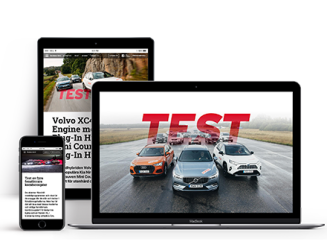