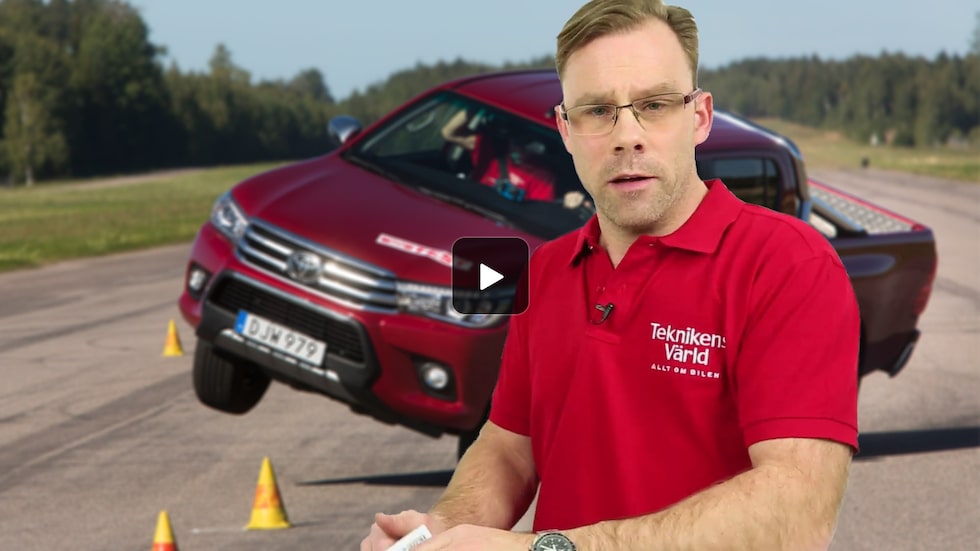 Toyota corrects the new Hilux after the moose test

Four months ago, the new Toyota Hilux came close to tipping over in the evasive maneuver known as the moose test. The Japanese manufacturer now announces that a package of measures that will address the problem is under evaluation.

Last autumn (Teknikens Värld issue 24/2016) we presented the test results – the new Toyota Hilux was close to tipping over in the moose test. What’s worse, it occured at low speed. The speedometer read no more than 60 km/h when the dangerous behavior appeared.

Soon after we could reveal that Toyota would investigate the matter further, which they partly did by visiting us at the editorial office to get a clearer picture of what happened.

It has been almost four months since then. Time Toyota has used partly to test the car in the initial configuration, but also to develop a package of measures intended to deal with the dangerous behavior. Toyota has used both its own ISO-standard avoidance maneuver test and Teknikens Värld’s moose test. They differ slightly in design, but the basics of the procedure are the same.

At a meeting at Toyota Sweden AB in Rissne just northwest of Stockholm we met those responsible at Toyota.

The meeting was also attended by representatives of Toyota Motor Europe in Belgium, Xavier Heylen (President and a director of Toyota Sweden AB) and Bengt Dahlström who is the General Manager External Affairs/Public Relations, Toyota Sweden AB.

The purpose of the meeting was obvious from the beginning, we were there to take part in the work Toyota’s engineers have done to address the problem and how they proceeded to solve the problem. Which even more clearly shows that Toyota takes this incident very seriously.

Since the meeting with Teknikens Värld (published in issue number 25/2016) Toyota has been testing cars in Japan and in Europe. The tests have addressed the problems and developed a package that consists of two parts.

The first part is that the tire pressure for maximum load is increased, and the other part is that the electronic stability control gets a new working pattern where more focus should be given to bring down the speed in the event of an evasive maneuver.

We were shown film clips from Toyota’s own tests before and after the measures and according to these films the measures seem to have the effect we are looking for. But Toyota knows that we are not satisfied to watch a movie in a conference room. Therefore, the next step is for us to, during the month of March, travel to Spain and the IDIADA testing facility just south of Barcelona where we will together with Toyota evaluate the package of measures that is soon to be introduced in the Hilux.

Toyota’s goal is to introduce the measures as soon as possible and to address already sold cars, but exactly when and how the latter will be taken care of is too early to say. However, there is no doubt that we will return to the matter and test the car in Sweden as soon as there are cars with the new version of the electronic stability control available on the Swedish market.

The reaction from Toyota can only be taken as serious. It is a very good start, but it is only when we see that the behavior is changed to the better that we will be satisfied.

When the Hilux came close to tipping over 2007, Toyota announced they would stop selling cars with 16-inch accessory wheels, which then was part of the problem. A similar measure is not planned for 18-inch wheels now.

And to you who contacted your Toyota dealer and were told that the cars have already been corrected, or that this would be a small thing – you have got the wrong information.

The information exchange between Toyota Sweden and the dealers seem to have failed in some areas, which has led to the wrong information being spread to customers as our survey among Toyota dealers showed (article in Swedish, here's a Google Translate version). Some Toyota dealers even claimed Teknikens Värld’s test to be incorrectly conducted. However, news that a package of measures is now in the pipeline means that we turn the other cheek – the problem is going to get a solution.